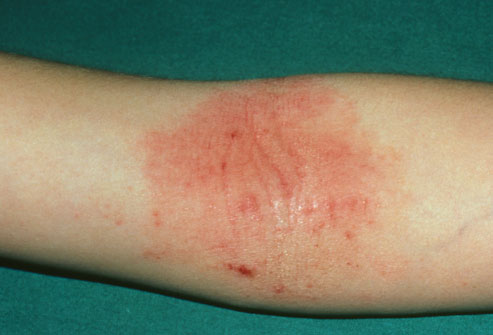 Eczema is a general term for several types of long-lasting skin conditions that cause inflammation of the skin. Eczema, often misspelled “excema,” is also called dermatitis or atopic dermatitis. Its symptoms range from mild redness and irritation to flaking, itching, blistering or cracking of the skin in severe eczema cases. Eczema is thought to be caused by the same factors that result in other types of allergy symptoms, but it often does not respond to traditional allergy treatments.

There are many similar skin conditions, so diagnosis by a skin specialist is important so that the best treatments can be recommended. Eczema varies in severity, and there is no single approach to treatment that works for every patient. Corticosteriods and antibiotics are often prescribed, but there are also natural remedies that are safe and effective for many eczema patients. In addition to medical treatments, whether natural or pharmaceutical, some patients also find relief with eczema clothing that is specially designed using very soft fabrics to minimize irritation caused by contact with the skin.

For alternative treatment of eczema, natural therapies have been reported to reduce symptoms. The data are limited due to relatively little scientific research being conducted on these folk eczema remedies, so many doctors consider individual reports of positive results to be anecdotal. Since they are not compiled into carefully controlled clinical studies, it can be hard to know what is real and what is just a coincidence. However, much of modern medicine was derived from the experience of many doctors helping their patients on the basis of individual experience and common sense. As long as safety is considered first, for many people it can make sense to give natural remedies a try, especially if expensive prescription drugs are not working well.

Borage oil capsules are one of the eczema products that may help prevent or possibly heal the condition. Although borage oil does not work for everyone, scientific studies have suggested that it can be useful for some people. Unfortunately, these were limited studies and do not provide complete information on the best dose and duration of treatment. However, borage oil side effects are rare and it is considered safe for use as a nutritional supplement.

Borage oil comes from the seeds of the borage plant (Borago officinalis), which is native to Europe and Africa. Borage oil contains high concentrations of gamma linolenic acid (GLA), which is a fatty acid that produces compounds with anti-inflammatory properties. A nutritious vegetable oil, borage oil contains between 20% and 25% GLA in addition to linoleic and oleic acids.

Eczema has been treated with borage oil directly applied to the skin and as a nutritional supplement taken orally. Because of the limited clinical data surrounding its use, patients should start with very low doses and gradually increase the amount used to be sure no side effects occur. Some reports have raised concerns about potential liver toxicity caused by borage oil. The unrefined oil contains small amounts of pyrrolizidine alkaloids, which are powerful toxins. However, these toxins are reduced during the refining process so that the purified oil contains only around 20 parts per billion, which is detectable only with sophisticated instruments and is generally considered a safe level for consumption.

Patients suffering from eczema or dermatitis may find it worthwhile to try to reduce symptoms using borage oil as an eczema treatment. As with all nutritional supplements, vitamins or alternative remedies, patients should inform their doctors that they are taking them to prevent harmful interactions with prescription medicines. Patients should always consult with a doctor or other health professional before deciding on treatments for any condition.